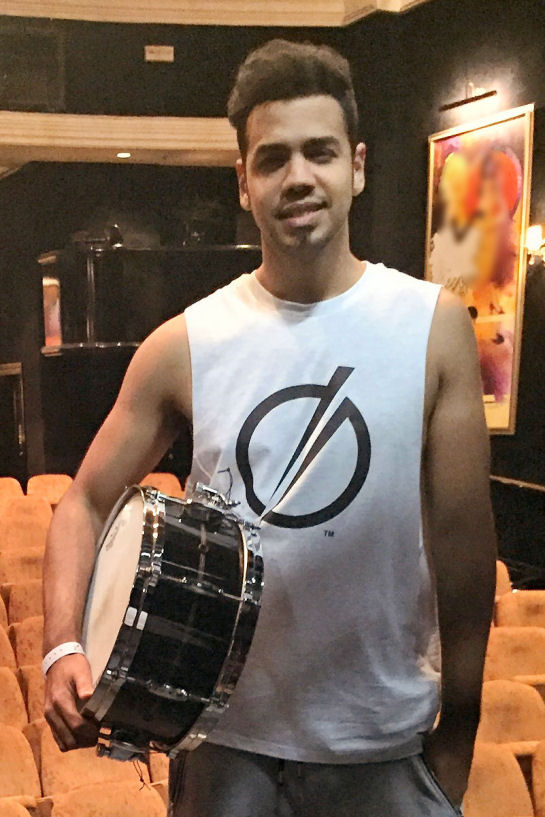 Darren Petersen has firmly established himself as a premier professional drum and percussion specialist in South Africa. Studying classical percussion and drum kit from the tender age of 9 at Beau Soleil Music Centre in Cape Town, Darren had excelled in his early career as a child vocalist and actor in touring musicals throughout South Africa, competing in solo eisteddfods and competitions for both vocal and instrument disciplines, and being awarded the prestigious Top Music Student Prize for his achievements.

In maintaining a passion for music throughout his formal schooling, allowed Darren to achieve many major accomplishments: being booked for his first professional gig and theatre shows at 15, joining the Cape Philharmonic Orchestra at 16, and securing the position of drummer in the South African Youth Jazz Band, touring South Africa’s biggest musical shows with South Africa’s best young musicians, including acclaimed the Joy of Jazz festival.

Upon completion of his high school career, Darren went on to spend a brief time at the South African College of Music, based at The University of Cape Town, where he majored in Jazz Performance. This lead to a boost in his music career, being fortunate enough to be part of the University’s prestigious Big Band and Ensembles, whilst still performing professionally outside of the University and developing his session musician career, backing up artists such as Loyiso, Zwai Bala, Kurt Darren and many others at corporate events - doing his first studio session within top studios in Cape Town.

Being involved in the diverse Cape Town music scene consisting of all genres of music from jazz, rock, pop, hip hop, reggae, dub-step and Drum and Bass, has enabled him to broaden his skill-set and experience. Through this period, he began playing for well-known artists’ and bands within South Africa at various live venues, music festivals, TV and Radio Broadcasts and corporate events. In allowing himself to diversify musically, has afforded Darren the opportunity to work with many of South Africa’s prime entertainment and music professionals, on both local and international tours. This has culminated in Darren learning and practicing the demanding world of live shows and tours, allowing him the advantage of adapting to play numerous various styles required by his clients.

In 2010, Darren embarked on a two month international European tour with Johannesburg based Hip Hop Artist, EJ Von Lyrik and Teba Shumba. Highlight performances include The Paleo Music Festival in Nyon, Switzerland and The Rio Loco Festival in Toulouse, France, sharing the stage with major artists N.E.R.D, Jamiroquai, Bra Hugh Masekela, Motor Head, Johnny Clegg and more. The tour also saw Darren perform throughout many cities in Europe including the Netherlands, Germany, France, Austria and Switzerland. In 2011, alongside the Cape Philharmonic Orchestra, Darren toured the United States of America in a month long tour of 18 shows, starting out in Florida and covering the east coast and north central states, ending the tour in New York City.

In 2012, Darren was invited to perform on tour with ex-con turned artist, Larry Joe, at the Royal Theatre of Amsterdam, in celebration of South African Independence. Locally, New York Based band Gazelle and Invizable, invited Darren on an annual tour earlier in 2012, which saw him travelling across South Africa with their electro live show finishing off at Splashy Fen Durban. Since 2007, he been fortunate enough to be exposed to short session tours for various corporate functions with various artists throughout South Africa.