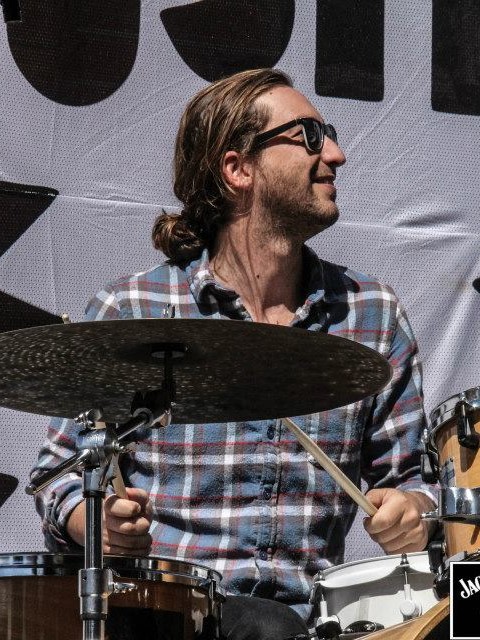 Devin Jones was surrounded by music from an early age and began playing the drums around the time he was 10 years old, playing professionally at the age of 13. He is currently the drummer for Jeremy Loops and has also played for side projects, Locnville, Plush, Hot Water, Captain Stu, 7th Son, Stereo Zen, Axxon, Jazz etc, Spratch, and the Natalie Chapman Band. He is known for his energetic and creative playing. Having established himself as a versatile drummer, producing and playing for musical projects in different genres including punk rock, rock, pop, ska, folk and electronica.

Devin started his career at Beau Soliel Music School under the guidance of percussionist and vibraphonist, Frank Mallows. He excelled in the college bands, in several school bands and had the experience of a lifetime to play in front of President Nelson Mandela. After school he attended the University of Cape Town where he excelled in performance and academic work, where he received the honour of being on the Dean's List.

In 1997, Devin joined his first band and in 1999 he co-created his first project, "Day Old Toast", with whom he recorded two demos. From there he has continued to connect with various bands and projects to gain experience and exposure across various platforms. In the late stages of 2011, Devin joined the super duo, Locnville. Locnville consists of brothers, Andrew and Brian Chaplin, born in New York and raised in Cape Town, South Africa. From there, Devin moved to become the touring drummer for Jeremy Loops, who debuted at #1 on iTunes in South Africa in 2014, headlined major festivals, and maintained #1 on the three most prominent radio stations in Southern Africa with "Down South", his breakout single.

He is scheduled to tour the UK and Australia with Jeremy Loops for the rest of 2016, and in the times when he's back on home turf he continues to be called up for recording sessions, as well as investing in the drumming education of his students back home.