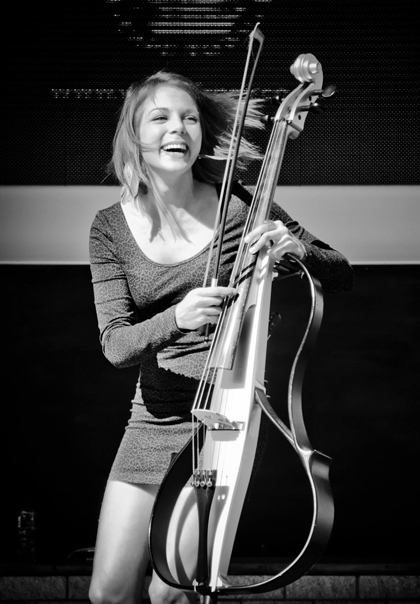 Ariella Caira started piano lessons at age five and later the cello at age nine (in defiance of the fact that everyone said she was too small to tackle the instrument).  Little did she know this decision would take her on an unexpected musical journey which would permanently influence her life path and shape her career.  Taking lessons initially with Gillian Knight and later with Anmari van der Westhuizen,

Ariella quickly found herself immersed in the world of music.  She spent many happy years at Beau Soleil, leading the cello section in the Senior Strings ensemble and as a member of the Beau Soleil string quartet.  She attended the Franschhoek Mountain Manor Chamber Music workshops for several years whilst still at Rustenburg Junior School for Girls and after winning the Herschel High School music scholarship, Ariella joined the National Youth Orchestra for three years during her high-school days.  Ariella then attempted drum kit lessons, under the tutelage of Frank Mallows and David West and then later focused on tuned percussion, obtaining distinction for her Grade 8 Trinity examination, with David West’s guidance, as well as performing in Jazz Band B and the Mallet Ensemble.  Ariella also completed her Grade 8 UNISA examinations with distinction for both Cello and Piano.

Ariella was accepted to study Theatre and Performance in 2005 at The University of Cape Town, graduating with Honours in 2008.  Throughout these years Ariella performed extensively with various orchestras and ensembles, notably Wired String Quartet, Simply Strings and Ace Quartet as well as with Sterling EQ on an ad-hoc basis.  Upon graduating, Ariella accepted the offer of a permanent position as Sterling EQ’s official cellist and thus began a unique and exhilarating musical journey.  Over the years, Sterling EQ, dubbed “South Africa’s, all-female, instrumental-pop supergroup” has released 3 CDs, several music videos and a SAMA award-winning DVD, as well as being the recipients of Huisgenoot Tempo and Ghoema Awards and landing a major record deal with EMI South Africa (now Universal) in 2011.  Sterling EQ has travelled to 11 different countries, including, India, Turkey, Seychelles, UAE and Tanzania and performed in front of thousands, including at the opening of the SAMA Awards, for the launch of the Cape Town Soccer Stadium and at the commencement of the IPL Cricket Tournament which was broadcast to millions around the world.  The band has also appeared regularly as guests on television shows including Top Billing, Pop Idols, Kwêla and Expresso, and shared stages with bands and singers such as Snow Patrol, Lira, Watershed and Boney M.

Independently of the band, Ariella has collaborated with many local artists and recorded for musicians such as Jeremy Loops, Markus Wormstorm, Dan Shout, Nicky Schrire and Aron Turest-Swartz.  She also teaches cello at St Cyprian’s School for Girls in Cape Town and when not making music, can be found baking (she holds an IHESA Diploma in Patisserie) running or practicing yoga, a passion which has lead her to undertake her yoga teacher training in Vinyasa Flow-Power yoga through The Yoga Life in Cape Town.
--
Ariella Caira