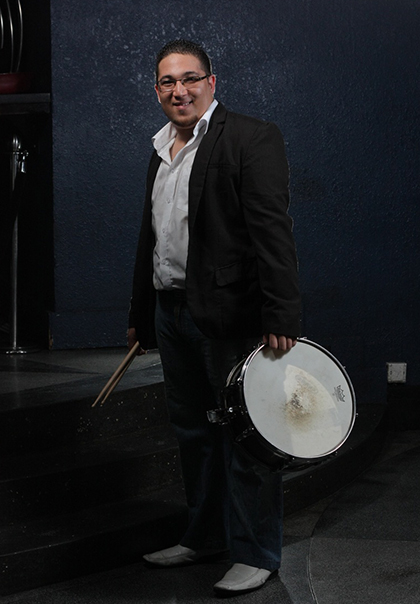 Lance Woodman’s passion for playing drums started when he saw the first VHS recording of Dennis Chambers. Chambers became one of Lance’s most important influences, along with Max Roach, Elvin Jones, Tony Williams and Steve Gadd. Lance got his first drum kit at the age of eight and later attended the well-known Beau Soleil Music Centre in Kenilworth, South Africa.

While studying music he played in the “Senior Stage Band” as well as the “Senior Wind Band”, which taught him to play in an ensemble and increased his awareness of how to work as a unit.

Being invited to gig professionally with the school’s principal, Frank Mallows, opened a door for Lance to a world he previously had known very little about. But that pivotal event would become a stepping-stone for his future, as his talent was immediately recognised. That meant that at the tender age of 17 Lance was already being offered club gigs! He rose to the occasion and a mere six months later he started working corporately with a band called Ovation Incorporated.

The band performed for corporate giants at venues such as the Mount Nelson Hotel, The Bay Hotel, The Table Bay Hotel (for their New Year’s Eve celebration), and The Cape Sun, amongst others.

And Lance has been performing professionally ever since. He has worked with some of Cape Town and South
Africa’s top jazz, pop, dance and show musicians, performing with artists such as Chad Saaiman, Stereo-Type
Records’ Lloyd Jansen, former “South African Idols” Lyndel Kearns and Karen Kortjie, and world-renowned South African vocalist Themba Mtshale, who was part of Sarafina!, a hit series and musical that played on Broadway in 1998-99 and travelled the world.