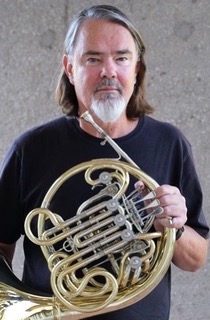 Erik Albertyn completed his undergraduate studies at the University of Port Elizabeth in 1984 after obtaining a Performer’s Licentiate from the Royal Schools of Music in 1979. In 1985 and 1986 he enrolled for performance studies at the Folkwang Hochshule in Essen, Germany under Prof. Hermann Baumann, one of the most celebrated horn soloists of his time. In 1990 an M.Mus in Musicology followed and in 1998 he completed a PhD at the University of the Witwatersrand. The topic of his thesis dealt with the establishment of the orchestra and the fusion of national musical styles as it happened at the Hanover Court, Germany at the beginning of the 18th century.

His musical career started in the South African Navy Band in 1978 and included principal and sub-principal positions in the PACOFS, CAPAB and SABC National Orchestras. In late 1987 he was appointed as a lecturer at UPE. He was appointed Director of the KOD-UPE Music Centre in 1997. In 1999 the KODUPE Music Centre was amalgamated with the Music Departments at UPE to form the School of Music. Erik was appointed Director of the School in 1999. He remained as Director and later HoD of the Music Department until 2017 with the exception of two two-year periods between 2002 and 2004 and 2009-2011. During this period the Music Department experienced unprecedented diversification and growth.
Much effort of the earlier years went towards establishing a brass teaching practice of national standing. As part of this endeavour the UPE/NMMU/Nelson Mandela University Brass and Horn Ensembles were created under Prof Albertyn’s direction. This culminated in several national and international collaborations as could be heard on several CD recordings produced by these two unique ensembles in South Africa. These recordings are available on most digital platforms. An outstanding feature was the UPE Brass Factory series of the
1990’s that combined jazz, African and classical musicians on one stage. Apart from ensemble music, Nelson Mandela University brass students continue to excel in national music competitions, concerto festivals and National Youth Orchestras. Several of his students hold important orchestral and teaching positions here and abroad.

He presented papers at several conferences, amongst them the Durham International Conference on Baroque Music (1992) and the International Horn Symposium in Valencia (2004). Refereed articles appeared in the respected international journal Early Music, the Horn Call (Journal of the International Horn Society) and SAMUS (Journal for the South African Musicological Society). He
regularly acts as external examiner for both performance and dissertation studies for UCT, Rhodes, Stellenbosch and Pretoria universities.

Erik has been extensively involved in community projects starting with a teaching project at the SALEM Moravian Church in 1989. Other teaching projects were initiated at Cowan High School, Gelvandale High School, Ed-U-College, the New Apostolic Church and at Khulile School in Motherwell, the latter together with the ECPO. He was a founder and Regional Director for the Field Band Foundation and has been instrumental in establishing the Eastern Cape Philharmonic Orchestra, an institution he continues to serve as principal horn and current
Chairman of the Board. He is the South African representative for the International Horn Society and served previously as Board Member and artistic advisor for the National Youth Orchestra Foundation and the Board of the National Youth Music Competition.

Erik is an active chamber and orchestral musician and regularly performs with professional orchestras throughout the country.